So it’s been a little quiet around here, and I’m sorry about that. Quiet usually means I’m in the throes of some crazy project, and this is no different. Today’s part of that project has been the writing of a proposal summary so that we can get final approval for a project I am really, really wanting to see go live.
Working on it has been a little stressful, but I just have to note that sometimes it just really makes me stop and go “wow, this is my life” when I look around at all the talented people I get to work with, and the beautiful things I get to help create. When I am feeling overwhelmed or sad, I need to remember this update because truly my life is full of beauty and magic and people who inspire me every day, and I am damned lucky. 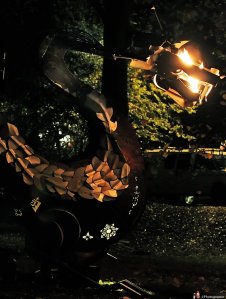 Speaking of that, here: here is Ryan Mathern’s Dragon Sang Bu in all her glory. If I can have one wish right now it is that she can live here in the park forever so that all my neighbors can feel a smidgen of what I feel right now when they go to visit her. Sometimes living in our neighborhood can feel like living in a war zone, and the Dragon of Compassion is such a peaceful reminder of what is truly important.

I know it’s been a little quiet around here lately, here’s one reason why: I’m creating a piece for the fashion show part of this event. Adios Frida and Diego at the High Museum of Art. 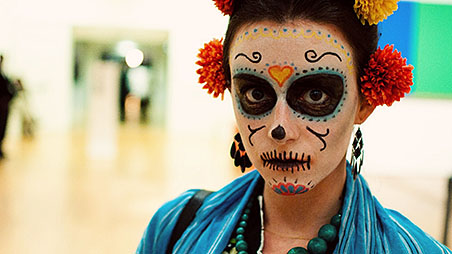 My piece is inspired by her words

“I tried to drown my Sorrows, but the Bastards learned to swim” and this painting 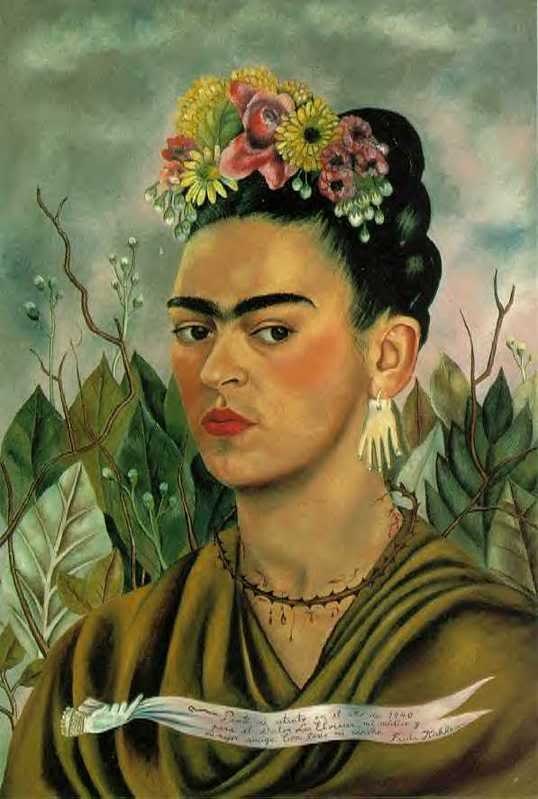 more pix to come after the event! 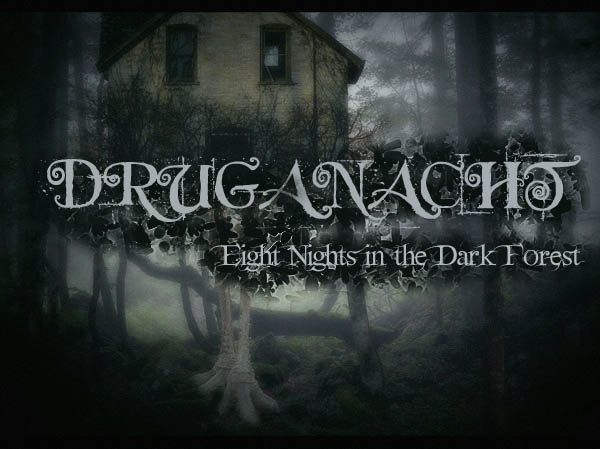 The Dark Forest is a place of Secrets and Whispers, where the Trees hold the Souls of the Dead and the Animals seek the Flesh of the Living. Wildness abounds, Spirits linger among the fallen branches, and the dappled Moonlight reveals the true nature of Man and Beast.
Through this Land the young Vasilisa must travel, seeking the wisdom of the Baba Yaga, a devilish Witch conversant in the forgotten languages of the Underworld, who holds the Fire of Life and Death in her hands.

October 11th to Nov 3rd in East Atlanta’s Brownwood Park. A benefit for EACA, showcasing the creativity of our neighborhood.

Coffee and blogs on the porch, at least as long as our internet stays up and this breeze sticks around. Husband is off racing, cats are frolicking in the yard. Our back neighbor got chickens and rabbits and luckily a good sense of humor since our cats spend most of their day either sitting on the fence or on the roof of the rabbit house, staring. I’m going to have to hurry up and get our chicken coop built just so the kittens won’t abandon me for more entertaining pastures… Triscuit is currently way up high in a tree overlooking the bunnies. It’s adorable.

Yesterday we finally (mostly) finished the new fence in front of the yellow house. Buh Bye chain link! We’re short 3 pieces of fence, but only because once we got it up I decided on a different path for the end. The last 3 pieces will only take a few minutes to do tho, so…
Now to build windowboxes…

I thought a guy was coming over this morning to look at the front stoop and back deck on the grey house to give us estimates, but he didn’t show. I guess he’ll come by after the race is over? I hate our current front stoop, and not just because it’s actually rotting and falling off, lol. It slopes down on the same angle as the roof, instead of having a little triangle point like most porches. I’m hoping while it’s being repaired, that it won’t cost much more to turn it the “right” way and I get something much prettier for the front. I’m sort of in love with this house over by the golf course. I would really love to be able to do this with ours, albeit it would be on a smaller scale since the grey house is teeny tiny.

oh, and speaking of teeny tiny and adorable, I just found this baby picture of Triscuit that Liz took. *melts*

The kitchen in the Yellow house is driving me insane. Something must be done, but since the whole house will get gutted in a couple of years, the “fix” needs to be cheap and relatively easy. Paint will go a long, long way, as one of the things I hate most is the horrible faux finish the last owner applied.
My problem is what color. 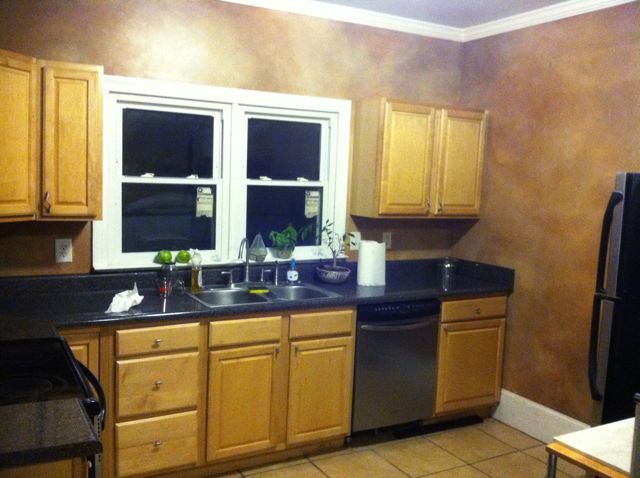 (taken at nite, sorry, it’s a little off, but you get the idea)
The cabinets are a pale oak-ish color, and are too nice to rip out. Painting them would also be a headache I’m not quite ready to tackle, although that may happen within the year (and they would go white, at least the uppers). The floor is a beige-ish ceramic tile which would actually be passable except for the horrible brown grout. Apparently changing the grout would also be a PITA, so that’s out. The countertops are black/brown speckled formica. (changeable, but why bother for 2 years when they’re in good shape?)

Here’s the other side. The island used to be twice this size, but I ripped half of it out and put up the beadboard, which also needs painting. The top is temporary, will probably get an Ikea butcher block top for it, since that would be re-useable. You can also see where I started painting the back wall, it is now a giant chalkboard. 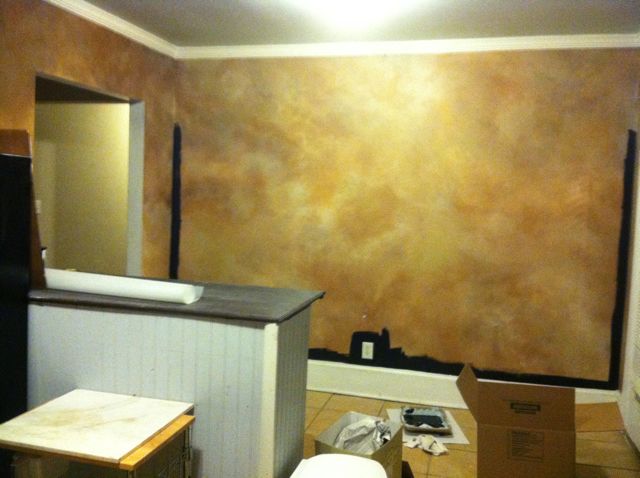 Most of the photos of kitchens that I see online with this combo of floor/cabinet/countertop are painted some variation on beige, which seems incredibly boring. The room gets a ton of light, has 10 foot celings and french doors onto the deck. It also only opens onto a hall, so coordinating with other rooms is not an issue.

Examples of kitchens I love are here, but as you can see, they are pretty far from what I have to work with. (and I know… I’m complaining about beige being boring and most of these are white. I know. )

Here’s the side wall, just for good measure. The drop-leaf table is going to my mom’s, so pretend it’s not there. 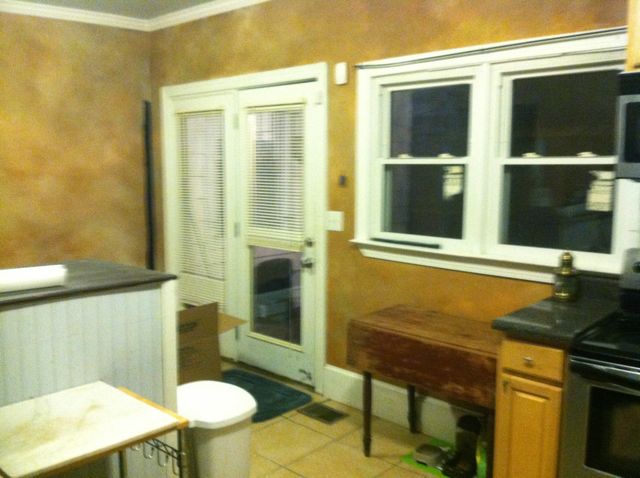 Contemplating an apple green, or maybe turquoise. Or not. Anyone got any good ideas they want to share? Bonus points for pictures!

I shouldn’t even really post this, I should have the patience to wait for the people with the actual cameras. But who are we kidding… me? patient?

I got the opportunity to work with extraordinary Atlanta Wedding Photographers Leah and Mark tonight, at our former loft residence, now known as The Goat Farm. The ever-lovely Lindsay conspired with me to create the character, and luck dropped the most perfect prop into my lap. I will post more about it all soon, but here is a very bad photo from my dying phone, which shall have to suffice, because this stylist is impatient. 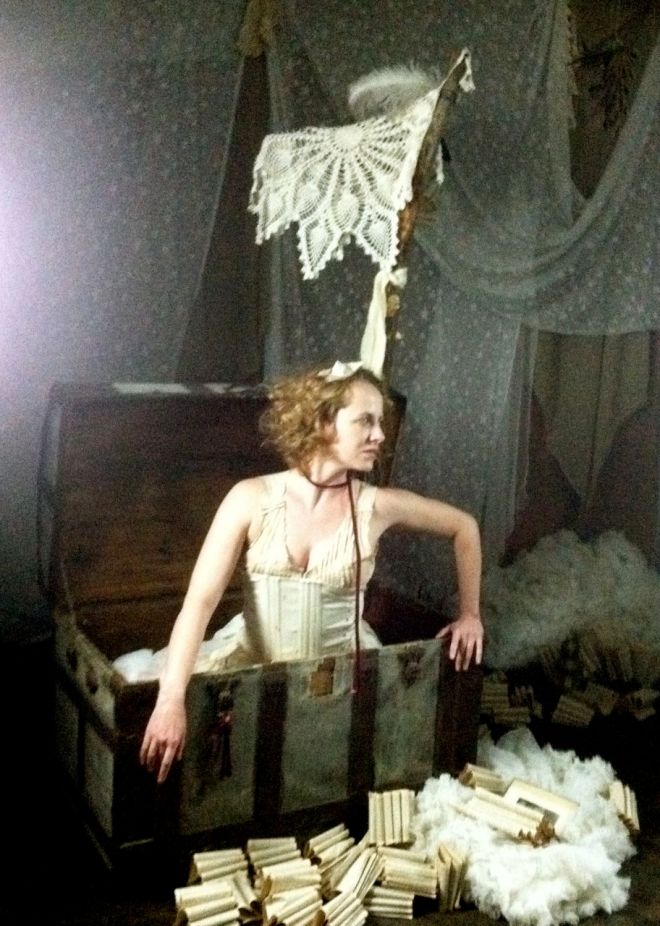 Recently, a fellow Etsy-an contacted me about custom making one of my Snow Queen capelets in child’s size for a photoshoot. After a postal snafu of epic proportions, the capelet arrived, and the photoshoot was staged. Yesterday, I saw the results, and they are so gorgeous I just have to share. 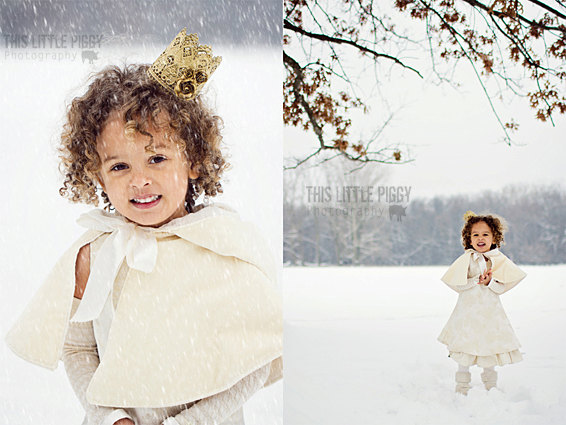 The images were shot by Julie of This Little Piggy photography out of Chicago. 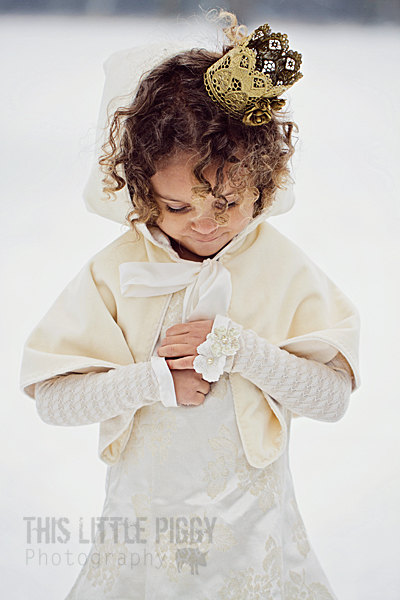 But wait, there’s more! She also made those adorable crowns, and sells them in her own Etsy shop 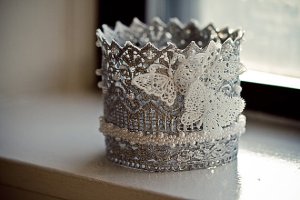 ANyway, many many thanks to Julie and This Little Piggy. I’ll be making a few more of these capelets next week and listing them in my shop, if anyone is interested in one of their own.

Was lucky enough to have my dupioni silk wedding kimono used in a photoshoot by amazing Atlanta photo team LeahandMark.com 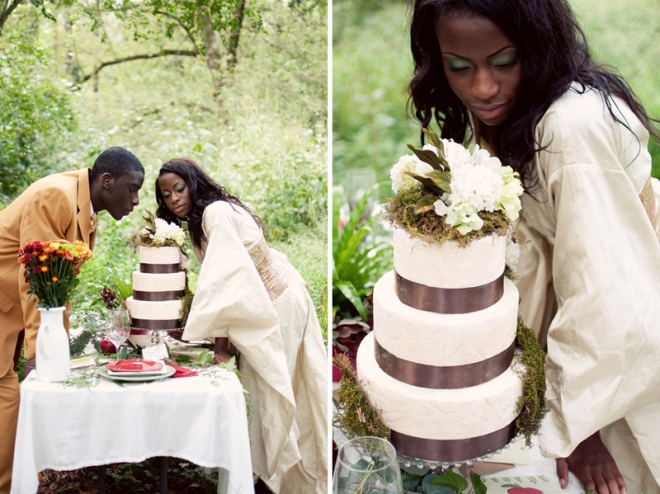 Check out the entire set here for some amazing work! 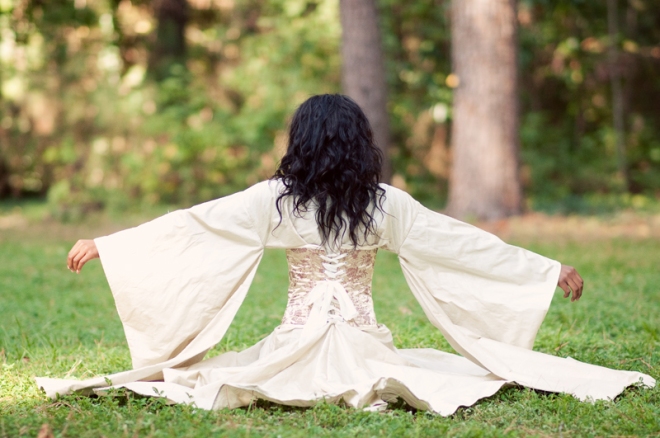 Thank you Leah, Mark and Raven! 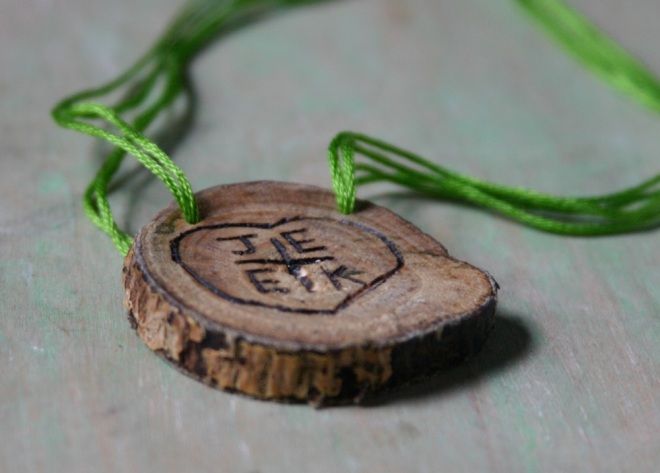 As of late, I’ve been getting a little bit restless with one of my side projects. I have this vision of how it should be, but have been frustrated trying to make that vision a reality. It’s one of those projects that has made me miss the creative commons of art school, because frankly, on things like this I work much better with a partner. Luckily, a kindred spirit has appeared on the horizon, and I am finding myself recharged, finally feeling like I can not only make my ideas come to life, but will also see them grow exponentially via collaboration. It’s funny how the universe sends things your way sometimes, isn’t it?

On that note, hey Universe, there’s this great project over here that could use a bit sent it’s way:

As a creative entity InByTheEye is a company I created which focuses on works of a mythic nature – those works being films, writings, plays, and events. I chose this name to remind me of my initial moments of inspiration and hold them tightly as the primary source behind everything I do.
Lisa

If you are interested in getting involved, or know of a networking/job posting site for actors, please read and share the listings below. Thank you!

1. Seeking stage director/collaborator for unique project. Non-Union. No pay. Familiar with the classics and myths. Stage production based on Alice in Wonderland, with a darker twist. Will go up for one night in January/Feb with two actors playing all roles. Opportunity to develop further. Downtown Atlanta location. — Writer has just relocated to Atlanta from NYC – with experience in the New York theater circle. Not a high budget production first time out. Hope to develop into longer running show. Ability to bring your creative ideas to the table and have them realized. — Please email resume, letter of interest, and questions to casting@inbytheeye.com. Thank you!

2. Seeking actor, male, 30’s, tall, stong, to play multiple roles in new dark fairy tale play going up in Atlanta Jan/Feb for one night. Must be classically trained and able to handle playing more than one role in a show. Good with body and movement. Must be able to lift 100-105 lb actress off the ground. Opportunity to develop this character/s further. Story based on Alice in Wonderland with a dark twist. Please send headshot, resume, and cover letter to casting@inbytheeye.com
Thank you! 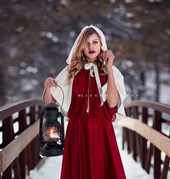